The Beatles and I 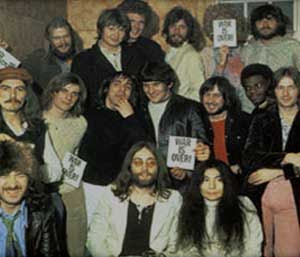 The Beatles are back, not that they ever went away, it’s just that there’s new, expensive Beatle product to be flogged to aging baby boomers.

To a child growing up in communist Poland, the Beatles were everything. There was Lenin, Marx and Brezhnev staring grimly from posters everywhere, promising a life of desolation, but just beyond the horizon, there was John, Paul, George and Ringo.

We couldn’t buy Beatle records, but they filtered in anyway.

In 1969, my father got kicked out of Poland for being Jewish - this was such good fortune, that suddenly everyone was scrambling for Jewish ancestors. We had to spend ten days in Vienna. I remember going to a record store and looking at the latest Beatle album “Abbey Road”. Little did I know that within 6 months I’d be living at 40 Abbey Road - visible on the cover if not for the trees.

All these Americans tourists would descend on Abbey Road, posing for pictures on the zebra crossing and holding up traffic. I laughed at those silly Americans - well, we’re destined to become what we laugh at, because I’m a foolish American myself now.

On Dec 15th, 1969 John and Yoko were giving a charity concert the Lyceum (I found snippets of it on You Tube). My friend, Kasia, a popular composer in Poland was visiting, and we decided to go. Other acts on the bill I remember were Blue Mink and Delaney & Bonnie. Then John and Yoko came out with their band: Eric Clapton, George Harrison, Keith Moon of the Who, Billy Preston and others. Wow.

The first number was fine, if unrehearsed, but then Yoko started screaming. Kasia, also a voice coach, said she’s projecting correctly (if unpleasantly) and protecting her vocal chords and she could go on for hours. And indeed she did. The place practically cleared out. It was December 69, before the Beatles had officially broken up and people were confused - what was Lennon up to with this dreadful woman? What about the Beatles? They were having none of it - they’re not hanging around for this shit, some Asian woman yelping like a cat in heat. Lennon was not exactly popular in 1969.

We went backstage, just walked in - John and Yoko were holding court, totally out of it, glassy-eyed, wishing everyone peace and understanding. Yoko sat there like a malevolent squaw. Kasia and I exchanged pleasantries with the Lennons, John signed Kasia’s album and they wished us peace. I guess if you become the most famous person on earth at a young age, it’s OK to crack under the strain.

On Dec 8th, 1980 I was doing a gig at Beefsteak Charlie’s on 8th Ave & 45th St. I was on stage when suddenly the audience lost all interest in me and I heard loud whispering. John Lennon had been shot, forty blocks from here. Early the next day, I had to go pick up my green card - 9th Dec 1980 is when I became legal.

Just think - they’re selling music now that was popular over forty years go. In 1965, nobody bought music from 1925. Nothing much has changed since the 60s, except for the Internet and cell phones. And as long as the baby boomers are still around, nothing much will change. Hip hop only exists to remind us we’re old farts. On the bright side, women in their sixties are becoming the most powerful demographic.

Actually the Beatles got remastered for the Cirque de Soleil spectacle “Love” in Vegas - they had to do something to play it over a few hundred speakers. I hated the CD “Love” - it concentrates on the late era, psychedelic Beatles and is pretentious and pompous, sucking the simplicity and joy out of the band.

I’ve listened to a few of the new remasters - the sound is fuller and lusher, the instruments more separated. But, hey, maybe the Beatles wanted their guitars squished together. The old recordings are just fine - it‘s not like you listen to the remasters and can‘t go back. In fact, you can‘t wait to get back - I like my Beatles gritty.


Wolynski is a photographer and former comic who lives in Las Vegas.
Posted by Pauly at 6/01/2011 11:33:00 AM
Email ThisBlogThis!Share to TwitterShare to FacebookShare to Pinterest
Labels: Wolynski