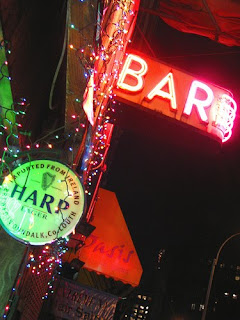 I knew Eastman was a dealer. He knew that I knew, which meant that he also knew the cardinal rule: no dealing inside the bar -- especially the bathrooms and in front of the bar. Maybe Eastman skirted the rule when I wasn't working, but in the three years I tended bar at the Lodge, he never crossed the line. He met his clients at the bodega down the street and conducted deals on one of the adjoining blocks. He hung out in bar when one of his clients was running late, or if he happened to arrive early. He never met them at the bar. Always down the street. I never asked where he lived, but assumed it was within a five or six block radius.

Peggy with the Lisp was one of three Peggys who worked at the Lodge (one server and two bartenders). The server had seniority and known as Peggy, just plain old Peggy. The two bartenders were called Peggy Red and Peggy With the Lisp. Of course, we never called them that to their face, but whenever my co-workers and regulars engaged in banter, we used the three variations of Peggy for clarification purposes. Yes, it could be confusing to an outsider because neither bartenders had a lisp, nor were redheads, while Peggy, the server, at one time was a natural redhead but she constantly changed her hair different colors and styles. I have no idea how Peggy Red got her name, but the owner's wife told me a story about the origins of Peggy with a Lisp that I have yet to determine is the truth or just bar folklore. Supposedly a year before she got a job at the Lodge, Peggy with a Lisp worked in Times Squareat one of those campy-themed chain restaurants with a faux neighborhood bar up front. Peggy with a Lisp was the size of a ballerina. She's tiny and graceful behind the bar, which is why I always liked working with her because she never got in my way. As the story goes, one hot Friday afternoon in August, a couple of Puerto Rican secretaries were getting their drinky drinky on at Happy Hour before they rode the subway back to Queens. They were sloshed on Margaritas and giving Peggy with a Lisp a hard time the entire shift. At one point, one of them complained that there wasn't enough tequila in her drink and called her a "skinny lil white bitch." Peggy with a Lisp had her back to them and turned around as the secretary threw her margarita at Peggy with a Lisp, but her nimble self easily dodged the drink and in one swoop, she jumped across the bar and cold-cocked the secretary, who instantly fell off the stool. Peggy with a Lisp packed a powerful punch and fucked up the secretary's jaw so badly, that the secretary spoke with a lisp the rest of her life.

You see, I told you it was hard to believe, but that's supposedly how Peggy with a Lisp got her moniker.

Anyway, sorry for this odd tangent, but Peggy with a Lisp was the one who told me that Eastman was a trust fund kid, and an heir to the Eastman-Kodak fortune. Why he was a dealer, no one at the Lodge knew for sure. My hunch was that his lifestyle was so extravagant or his habit was so bad that his monthly checks were not enough to cover his vice, so he sold on the side just to cover the deficit. My other theories were that 1) he was bored to death, or 2) he lacked intimacy and human interaction, and we all know that known drug fiends will always call you to "hang out", and 3) he wanted to rebel against his uber-rich family, and what would be a better fuck you to his uppercrust parents than dealing cocaine and speed?

On his good days, Eastman was fun to chat with -- very intelligent, funny stories, and obviously well-read. But sometimes, Eastman showed up to the bar spaced out of his tits and floating ten feet off the ground. On those days, it was tough to talk to him because he incoherently babbled.

"Never been on an anti-depressant. Whiskey is the only happy pill that I need," I proudly boasted.

"Well, that's good. Because the people who are on it are fucking crazy. Stay away from them. They can snap at any moment. They are ticking time bombs. That stuff is like crack."

"Like crack? Prozac? Are people on that these days? I thought there were better happy pills, like that Wellbutrin. I think that's what Peggy Red is on."

"Keep an eye out for her. You never know when she'll just lose her shit and start stabbing customers. Every day people do crazy shit in the City and most of them flipped out because they didn't get their daily dose of Prozac or Wellbutrin, or they build up such a huge tolerance that they can't function. That's when the hallucinations starts happening, and the voices in the head won't ever go away. Instead of cops busting potheads and drunks, they should be going after everyone on Prozac, setting up surveillance on shrinks, who are their suppliers. They need to compile names of shrinks and add them to a crime database. Anytime you have mad scientists mixing chemicals together to create a new wonder drug, you're in deep trouble, because people have different reactions. You see all of those happy shiny people in commercials for drug companies, and yeah, maybe the drug improves the life of some people, but then they get hooked and become major addicts. You never see commercials warning you about the dangers of getting hooked on Prozac -- like the housewife who fell into a zombie-like trance and hacked up the family pet with a butcher knife, then carefully wrapped the pieces of Fluffy the Cat's carcass in aluminum foil, tossed the feline remains in the back of the freezer, and told the kids that the cat snuck out of the house and ran away."

"Which is why they pay off the mainstream media to keep those stories out of the news. No one wants to hear that their neighbors, or the guy sitting int he cubicle next to you can explode into a fit of rage at any moment. I don't blame them. After all, we're all addicts, and a byproduct of our consumer society that does what it can to numb their senses from the constant bombardment of propaganda to get a job with corporate overlords so you can afford to buy stuff. We really need to blame the shrinks. Instead of actually teaching their customers how--"

"No, I mean customers. When you buy drugs, you're a customer. When you see someone who wants to assist with your health, especially mental health, then they are a patient. But anyone who goes to see a shrink is a customer. OK, where was I before you interrupted?"

"Something about shrinks and customers?"

"Oh yeah, so instead of shrinks sitting down and showing these people how to dealing with life's problems, they do the opposite, they barely listen, scribble down the name of a drug and get them out of the office, so they can see another customer and repeat the process. Shrinks are quick to pawn off scripts. Problem solvers in pill form. Shrinks are the real drug dealers and complicit to hundreds and thousands of senseless murderers in our society. The kid up in Harlem hustling a few bucks for rock gets picked up by the cops and tossed into the system, never to be heard from again. But the shrink who sold the most happy pills got rewarded with a palatial Park Avenue apartment, a house in the country, and weekend getaways to St. Moritz."

All of the talk about Prozac and the evil pharmaceutical corporations was boring only because I heard his rant a dozens times already. Luckily, a blonde squeezed herself up to the bar a few spots down and I rushed to take her order.


Paul McGuire is the author of Lost Vegas. Originally from New York City, he currently resides in Los Angeles.

The Photo in this short story was also taken by Paul McGuire.
Posted by Pauly at 1/01/2011 01:11:00 AM
Email ThisBlogThis!Share to TwitterShare to FacebookShare to Pinterest
Labels: Paul McGuire

Paul, you get better and better.